This is a part of my MMO Tourism series. For more information on the series, click here.

Opening Comments
I thought it would be apropos for my first blog post under its new name, Occasional Hero, to be a superhero MMO. DC Universe Online is a game that somehow never caught my interest. I’m certainly not opposed to superheroes or anything–I have seen and enjoyed most of the perennial Marvel and DC movies and such–but the idea of a superhero MMO doesn’t excite me in and of itself. DCUO went F2P while my college career was ramping up, so I didn’t have much time to sample new free-to-plays, and also had the unfortunate timing of being right before the launch of Star Wars: The Old Republic, for which I was very excited. That said, as I mentioned last time, I’m really sick of fantasy, so any other setting would be preferable at this point. And there are a lot of things I like about comic books, like the way they throw together a bunch of characters that don’t really make sense together and make it work. In a world without comic books, who would believe that a movie about a Norse god, an arrogant millionaire in a powersuit, a scientist who gets really strong when he’s angry, and a guy who’s really good at shooting arrows would be one of the most successful and hyped movies of all time, raking in over 1.5 billion dollars and shattering a bunch of box office records in the process?

I’ve played a few other superhero MMOs, and none of them were that great. Champions Online had a cool character creator, but sadly that was the most I had in that game. Marvel Heroes was entertaining for a while, and I still pop in and play every so often, but it lacks substance. Hopefully DC has a better showing. Sadly, I missed out on City of Heroes/Villains. The way everyone talked about it when the plug was pulled made me wish I had, but of course at that point it was too late.

Character Creation and Customization
The character creator has a lot of nice variety to it. I can think of no other MMO that lets me choose between playing as a humanoid fox, wolf, zombie, cyborg, or crystal. I find it interesting that you choose your super powers and weapons before customizing your character’s appearance. I’m not sure if they’re trying to be different, if they think this shows an emphasis on combat versus looks, or if I’m reading too much in to it and they just did it that way because it was convenient for them.
Weapons seem more important than super powers, but lack description. Are some more tanking focused? Damage focused? Do some synergize better with certain powers? I just had to guess, but I like the idea of a highly customizable character.

The character customization interface is somewhat clunky and unintuitive. There are a lot of menus to drill down through, and it’s easy to get lost in them. For instance, when you click Customize, you can choose Skin, Gear, and Colors. When you click Gear at this stage, you can customize the looks of your various pieces of gear. But if you choose colors, there’s another Gear button. On more than one occasion I tried to back out of the Colors menu to change some of my gear and ended up going to the gear color changing menu. I don’t understand why I couldn’t just choose the colors on the same menu where I choose the gear. Perhaps worse is trying to choose a men’s hairstyle. Rather than having hair and facial hair be separate options, you have to scroll through every possible permutation of hair/mustache/beard possible.

My guess is that the reason for the poor interface is that it was designed with the console port in mind. It’s a minor annoyance, but an annoyance nonetheless. Speaking of minor annoyances, I’m also a little annoyed that i can’t customize my character’s face. I’m guessing that the developers thought it wouldn’t be important since most of the head gear consists of masks that cover the face. Super heroes are supposed to be anonymous anyway, right?

I ended up with flight (which was a great choice), nature power (a healing role), and the staff weapon. As previously mentioned, I have no idea if these work together. I chose them solely on the basis of the fact that they looked cool. Here’s Biomimetic Lifeform. 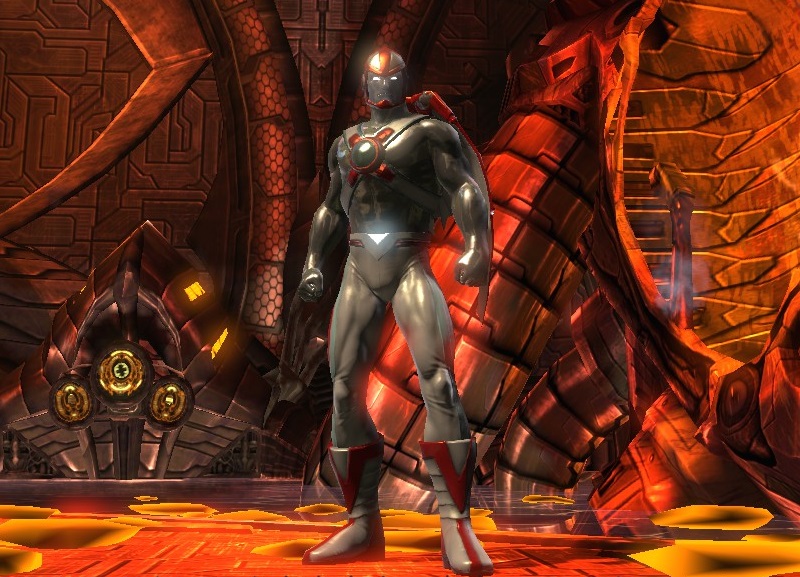 Yes, I know, I’ve been watching too much Star Trek lately (if that’s even possible).

Tutorial
The opening cutscene is nothing short of epic. It makes you wonder the whole time why every hero in the Justice League is getting their you-know-what handed to them. Then, just as Luthor has finished off every DC superhero you’ve ever heard of, he realizes there’s a bigger threat. Then you’re introduced to the wibbly-wobbly timey-wimey stuff; the game takes place in an alternate universe where Luthor has traveled back in time and used Braniac technology to infuse a bunch of random normal people with super powers. It’s an ingenious explanation of why there are suddenly thousands of supers you’ve never heard of (i.e. players) running around.

I really enjoy the animated comic book-style cutscenes. “These humans resist my assimilation.” Humans seem to be pretty good at that in just about any universe. I guess I’m not the only one who’s been watching a lot of Star Trek. Speaking of Star Trek, is Brianiac… voiced by… William… Shatner? Thus far the voice acting has been pretty unimpressive. Hopefully it’ll get better, but I’ve played games with mediocre voice acting before (I’m looking at you, Guild Wars 2) and it hasn’t bothered me too much, so I think I’ll survive. The tutorial itself is pretty standard; attack some trash mobs that are no threat to you whatsoever, level up once or twice and learn how to slot skills, equip gear, etc. You’re dropped into a Braniac ship and guided by Oracle (Oracle is a superhero? More like supervillain… I knew from the moment they bought Sun Microsystems that… wait, sorry, different Oracle) to the mandatory incredibly-easy-to-destroy weak spot of the ship. Seriously, haven’t you seen Star Wars? Finally, Superman appears and there’s a kind of bonus round where you fight alongside him to defeat all of the evil (and extremely weak) robots. I’m pretty sure I could just stand in a corner and let him beat down all of the bad guys, but who hasn’t dreamed of being Superman’s temporary sidekick? 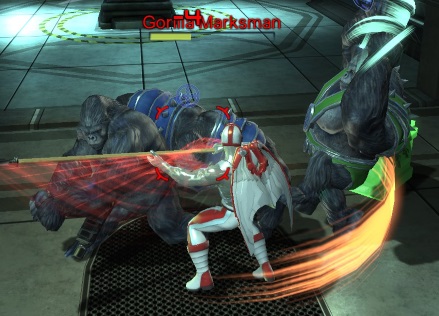 When I first stepped into DCUO and started messing around with the combat, I groaned. It’s basically the same as The Elder Scrolls Online’s combat; aim with the mouse, click to attack, blow a few cooldowns now and then. They also both have console versions, which also makes me nervous. How dumbed down will it be so it can be played with a controller? I was pleasantly surprised to find my fears unjustified, however. DCUO isn’t just “click to attack, hold to attack harder” like The Elder Scrolls Online. First of all, the left button is always melee and the right button is always ranged, regardless of weapon. Holding the mouse button activates, not just a stronger attack, but a different attack. For instance, with the staff weapon, holding the left button makes your character jump to his target and attack, and holding the right button shoots a projectile related to your superpower (in my case a ball of thorny plant mass), which is a nice touch. What makes DCUO’s combat even better than TESO’s is the combo system. As you level you can put points into your weapon skills, adding passive bonuses to existing attacks, or creating new combos you can do by executing a series of left or right clicks and hold clicks. 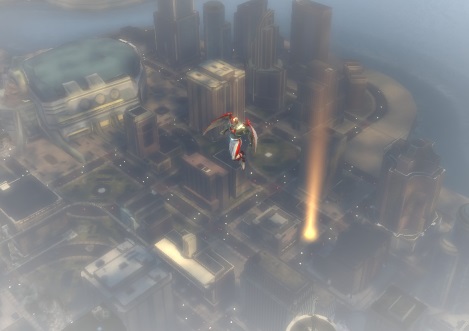 Moving around in DCU is a pleasure, especially when you choose the flight power. I especially like that my “Tech Wings” actually flap when I fly. The first thing I did when I exited the tutorial? Flew straight up until I hit the top of the game. The second thing? Turned off my flight power and dropped like a rock. Fortunately for our hero, there is no fall damage in DCUO. Seriously, though, why would you choose any other power? If you do, acrobatics and super speed allow you to run up walls (and some ceilings) and jump really far, so it’s not like there’s a lot you can’t access. Also, is it just me or does “Acrobatics” turn you in to Spider-Man? Whoops, wrong universe. I also like how your movement power gives you combat abilities later on. I’m guessing that flight’s powers are super nerfed, because otherwise I feel like everyone would choose it. Maybe that’s just me.

What was unique about this game?
I think the most unique thing about this game is its console version. It’s the only major MMO (other than the ill-fated Final Fantasy XIV) that I know of that launched both on the PC and on 7th-gen consoles (feel free to correct me if I’m forgetting something). I took it for a spin on my PS3, and it actually plays remarkably well. The only problem is that I feel like the hotkey skills would get frustrating, but I guess it could also be seen as an element of strategic planning ahead. Perhaps this calls for more investigation.

Also unique is the combat. This is the farthest thing from a WoW-like MMORPG that I’ve ever seen that I think still belongs in the same category. I don’t think every MMO should try to emulate it, but if you’re an action game fan, this is the MMO for you.

F2P Model
DC Universe’s F2P is pretty much the same story as most MMOs these days. They started out subscription-only, and, after about a year, they added a free-to-play option. Like many games, free accounts get access to pretty much what the game launched with, with “DLC” (which we used to call expansions back in my day) unlocking new areas, story content, and classes. I had a hard time finding a features matrix, which made me a little nervous, but the only big downsides I can see for F2P players is limitations on classes and zones (unlocked with DLC) and a currency cap. I can’t really offer an opinion as to whether or not either is ridiculous, as I’m not very far in the game.

Would I play again?
Surprisingly, yes… but probably not on a regular basis. Going in, I didn’t think I would like this one. I played the Elder Scrolls Online beta and hated its take on “action combat,” so I figured this would be similar. But I found myself really enjoying beating things up in DCUO. Maybe it’s the pace, or maybe it’s the addition of combos and more slot skills. Or maybe it’s just because it’s not set in yet another generic fantasy world. Either way, I think I’ll be visiting Metropolis again in the future.