Three Features Every MMO Should Have: Star Trek Online

This is a part of my Three Features Every MMO Should Have series.

I know, I know, every game can’t have space combat. What I mean here is that, in a genre where the best way to say what’s unique about a given MMO is to describe how its combat differs slightly from WoW, STO has come up with a completely different (if sometimes a little frustrating) combat system, that is, ship-to-ship space combat. It doesn’t mean you have to throw out traditional MMO combat, but it would be nice to have something different to break things up when combat gets monotonous. The only game I can think of off the top of my head that has done something like this is Star Wars: The Old Republic, albeit a little halfheartedly, with its starfighter combat. I say halfheartedly because SWTOR’s space combat is basically a minigame, but minigames with reasonable rewards are a welcome distraction in my book. 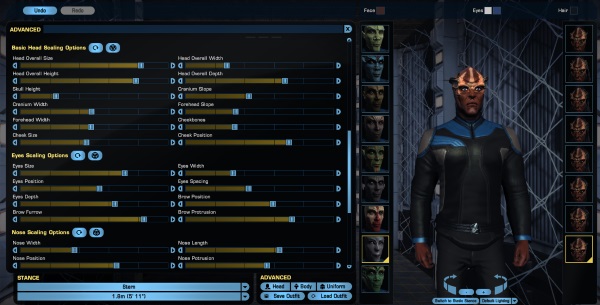 I can safely say that Star Trek Online is the only MMO I’ve played where I’ve spent more time in the character creator than in PvE. With enough fiddling on the ridiculous number of face and body sliders, you can make your character look like just about anything you want, especially the design-your-own alien species. I’ve seen some really convincing characters, from various Doctors from Doctor Who to an excellent Na’vi from Avatar to a variety of recreated Star Trek characters, both human and alien. It’s unfortunate that there is a general lack of clothing options for the game. Yes, I get it, Starfleet et. al. are supposed to be military organizations, so realistically there should be one uniform for everyone, the only variance from person to person being maybe a recolor to identify your section, but that wouldn’t go down well in a video game. STO’s sister MMO, the now all-but-dead Champions Online, has a great variety of costume pieces for your superhero (most of the more interesting ones are, of course, locked in the cash shop), but, ironically, I’ve always felt like it could use a little more customization of your actual character. I guess they’re trying to limit your superheroes to human mutants only, but I’d love to play a more exotic-looking hero. Maybe their secret future project will be somewhere in between?

Tab target? Action Combat? Why not both? At launch, Star Trek Online’s ground combat was slow, boring, and a bit flaky, especially compared to space combat. Well, it’s still flaky, but when Cryptic overhauled the combat and added shooter mode in 2011 (was it really that long ago? I’m old), it made ground missions a lot more bearable. Since you really only have three weapon skills and a handfull of cooldowns anyway, shooter mode really doesn’t feel like a disadvantage most of the time. The best part is that it’s completely optional, and can be toggled on and off with a single keystroke. There’s even a small damage buff for using shooter mode versus tab targeting, since there’s a chance you can miss targets. I tend to do a lot of combat in shooter mode, then switch to MMO mode when I’m out of combat. It was a little weird when I briefly gave Cryptic’s other MMO, Neverwinter, a try and it was permanently locked in shooter mode. It was kind of a turnoff for me to be honest, but I’m sure there are lots of people who prefer it, and I imagine it makes things easier to develop with one combat mode instead of two.

Side note here: I picked the features I planned on talking about for each game before I even started this series, and, as if they read my mind (or at least my blog notes), Guild Wars 2 has recently announced a system very similar to this one that will be added as part of their Heart of Thorns expansion. I’m excited, because Guild Wars 2 has always seemed like the perfect game for this, since it’s always had something of an action combat flavor to it. Can’t wait to try it out this Friday!

One thought on “Three Features Every MMO Should Have: Star Trek Online”