How To Ensure I Never Come Back To Your MMO

Ever feel like it’s too much work to go back to a game you used to enjoy? Like games have put up as many road blocks as they can to prevent you from coming back and possibly giving them money? I feel like I’ve been running into that a lot lately in some of my favorite games. Here are a few of the biggest ways to ensure that I won’t be coming back to your MMO any time soon.

Merge Your Servers and Don’t Give Me Slots

Let’s start with the bantha in the room. I logged into Star Wars The Old Republic the night after the server mergers and was greeted with the above. All thirty eight of my characters merged down to one server, with only nineteen character slots. Guess I’m not going to be making any new characters on that game ever again. On top of that, maybe a third of my characters had name conflicts. Granted, some of those were “vanity” names I’ve had since launch that I knew I was going to lose, but some of them are randomly generated names that just happen to collide with someone, somewhere. Now I have to come up with new names that still fit the character that I’ve grown attached to with a name that I can no longer have. The really crazy thing is that, for a couple of my oldest characters, this will be the third time I’ve had to rename them due to server mergers. I ended up just logging out without even activating any of them, and I don’t feel particularly motivated to try again.

Nerf Your Free to Play Model
While I’m ranting about SWTOR, let’s talk about their free-to-play model. When they went free-to-play, they didn’t have the best model, but it was passable. The purple gear restriction was annoying, but at least there’s an account wide unlock. The dungeon and raid restrictions were dumb, but at least there were weekly passes that could be bought from the cash shop or other players. The credit cap was harsh, and to this day it doesn’t really do anything to stop bots, as is its (supposed) purpose. I was hoping that one day they might dial all of it back some, especially that last one, given that their business model is now primarily build around lockboxes (which isn’t on this list, but really could be), but I was sadly disappointed. With Knights of the Eternal Throne, they unified everything in this Command XP thing that’s only available to subscribers. The idea is good–you can get endgame gear by filling a Command XP bar, and there are a variety of different endgame activities that give Command XP, so you can pick and choose what game type you enjoy most–except that it tells free-to-play players that they might as well not waste their time playing this game, pretty much guaranteeing that I won’t ever be back seriously.

Go Radio Silent
When all lines of communication out of your studio suddenly go dark, you lose a lot of consumer confidence. This is what’s currently going on over at Marvel Heroes. It doesn’t matter what the reason is, your players are over here assuming the worst. And, given the track record of superhero MMOs being shut down or shelved with no warning, players probably have a right to panic.

Never Add Solo PvE Content
Ah, WildStar, how I miss thee. But there’s only so much time I can spend doing dailies in Arcterra before I get bored. There are only so many times that I have fun can rolling new characters. Yes, WildStar has added new group content, but group content is something that I can only do at specific times, and only when I feel like interacting with my guild. Solo content is something that I can do at any time, which is a lot more likely to keep me interested in the game.

Add Content That Leaves Me Behind
This is a weird one, and it doesn’t happen often, but sometimes I come back to a game and just so much has changed that it takes a lot to get me back into it. Usually games are smart about just tacking things onto the end of the game–level cap bumps and such–but I can think of two instances when this has kept me out of games. One is RuneScape, and that was a matter of years of updates under new leadership. In the time that I was away from that game, there was a combat overhaul, a graphics overhaul, and several new skills introduced, not to mention the massive economic changes. The other is Marvel Heroes, with their “biggest update ever.” Every single character had their skills completely redone, meaning that players basically had to relearn how to play each character. To make matters worse, they also handed out a lot of compensation boxes, meaning that it was a few hours before I was able to dig out my inventory and bank and actually get to the point where I could play those freshly reworked characters.

Help, I Can’t Tell If I’m Having Fun In Hearthstone 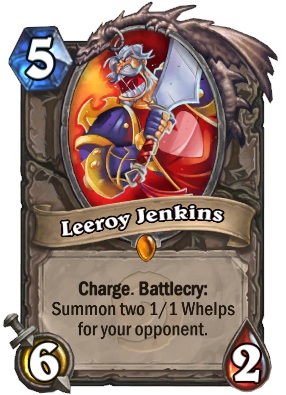 Stick to the plan!

I’ve never been in to the whole deckbuilding/collectible card game genre. Physical cards have always seemed like too much of a money drain, and, let’s face it, they’re basically the original lockboxes. Even after these games made the jump to the virtual world, it just wan’t something I was interested in enough to invest the time to learn all of the rules and strategies involved. When Hearthstone came out for PC, I gave it a shot. I figured that if anyone can make a game accessible enough to be appealing to someone like me who’s too lazy to learn the more complex games, it’s Blizzard, and the WoW theme made it easy to relate to how the mechanics of the different classes and cards worked. My initial reaction was that, if they ever put it on my phone, I would play it. A year or so later they finally did just that, I downloaded it, played a couple games, and it has sat there, untouched, gathering cyber dust in my games folder ever since.

Then, a couple weeks ago, I was talking to my friend about collectible card games, and I decided to give it another try. Since then I’ve played a few games a day–it’s great game for killing time or playing while listening to something–and the weirdest thing is that, while I’m playing it more and more, I’m still not really sure if I’m having fun. I’m pretty sure I don’t hate the game, but I’m really not sure how much I like it. I think the thing that bothers me most is that I’m never sure if I’m winning because I did well or just because of dumb luck. There really isn’t a good metric for that. Then there’s the deck building aspect of the game. I’m not good at judging whether or not a card is good, which is a problem in and of itself, but I do know for sure that I don’t have a lot of good ones. The only way to get more good cards, aside from dumping money into card lockboxes and rolling the dice, is to play. I guess that’s what keeps me coming back to the game. I know there are a lot of so-called “netdecks” out there for various levels of play that are the equivalent of meta builds for MMOs–people with more time on their hands than I do have figured out the way to get the most utility out of a class, and are nice enough to post about it on the Internet–but not only does that seem like cheating, it kind of takes the fun out of the game for me. Even with my limited knowledge of the game, I like seeing how the new cards I get can fit into my various decks. I guess I could do with netdecks what I sometimes do with my MMO character builds; make up a build I like and find a similar meta build and tweak my current build based on anything I like from it. Honestly, though, I’m not sure if I’m enjoying the game enough to make it worth my time.

So… am I having fun yet? Am I playing wrong? Because I’d hate to be bored and not realize it.